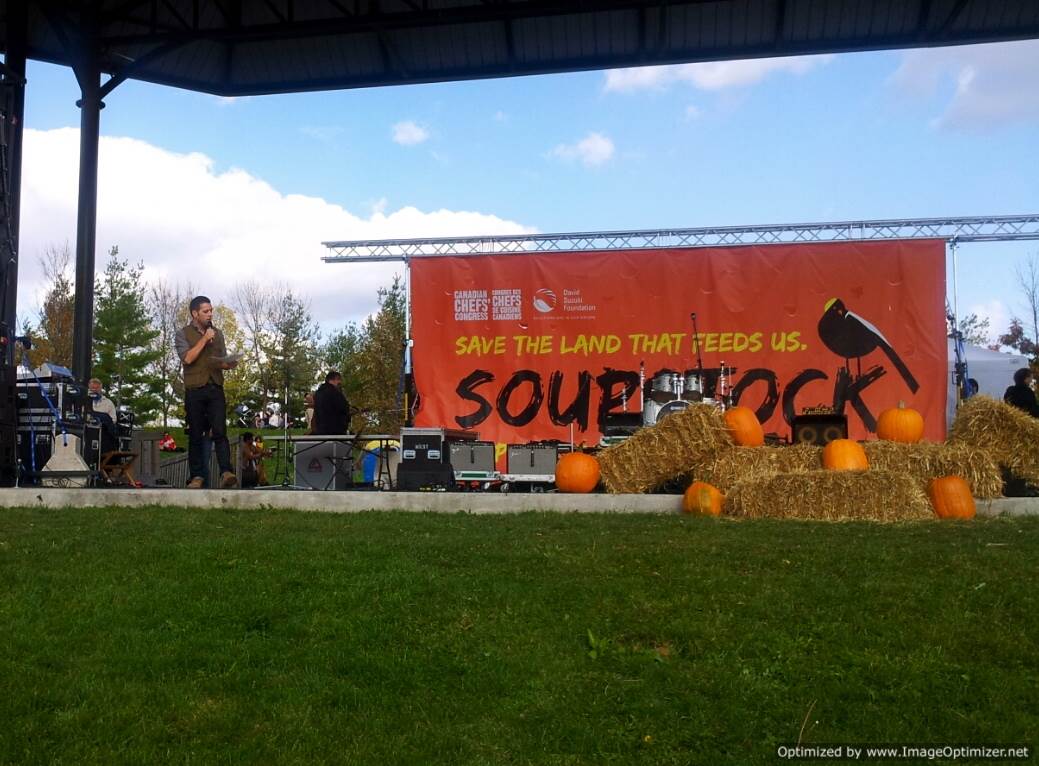 How perfect that Soup Stock falls on my Souper Bowl Sunday! This event was hosted by the David Suzuki Foundation and the Canadian Chefs Congress in hopes of raising enough money and support to stop the proposed Mega Quarry 100 km north of Toronto. There was a huge emphasis on supporting local agriculture and protecting our lands and natural resources. It’s an amazing cause and I highly suggest everyone check it out if you’re interested.

The event featured over 200 of Canada’s top chefs and their delicious soup creations. I went with my two awesome cousins, Ben and Scott, and with our disposable bowls in hand we first went to every single soup vendor on the grounds, then did a second lap where we decided what soups we wanted to try. I have some (not so beautiful) pictures of all the different ones we tried. The soup of the day for all three of us was the Pulled Pork and Brisket Chili by Ted Reader. Not only did they give you enough to feed a family, but it was the perfect soul-warming dish full of veggies and delicious slow-braised meat. It wasn’t too spicy, but had a great heat and heartiness to it. That being said, every soup we tried we were incredibly pleased with. So the start of this post is going to be pictures of all the things we tried, then in honour of Soup Stock I will share with you my recipe for a delicious home made bone stock. This is the stock that I use as the base for all of my soups and curries. Without further ado, the pics!

Yup, that’s Susur Lee, in the flesh! Obviously his was the first we tried. It was an amazing hot and sour soup.

Benj and Scoots trying Susur’s Soup. It was amazing. Great way to start the day’s tastings!

Next was the amazing pulled pork and brisket chili. It may have taken me the better part of half an hour to finish, but every bite was divine!

Winter melon and bacon soup. It was beautiful! Light and flavourful. Perfect follow-up to the heavy chili.

Stone soup. Another light and flavourful broth-based soup full of delicious organic veggies and smoked pork. By Men with Knives out of Collingwood.

Men with Knives were also handing out free pork crackling and ribs. They may have been the best thing I have eaten in… ever. Top five for sure.

Yup, that’s Dusty from season 1 of Top Chef Canada! He made a pumpkin and potato soup. I totally wanted him to win that season. And not just because he’s adorable.

Today I’m going to share with you my simple recipe for the broth I use as a base in all of my soups. Bone broth is a powerhouse of nutrition. Packed with minerals from bones, it is very soothing and healing for the digestive tract. Its mineral content also makes it very alkalinizing (the opposite of acidic, which is not something we want to be) for the body.

Not to mention making your own broth gives you a place for your kitchen scraps and adds a swift right-hook of flavour to any soup, stew, or roast. Some people are super hardcore and just drink this stuff straight from the jar. I, however, am not. I like to add my broth to different dishes and try to get at least one serving of this nutritional heavyweight a day. Since I’m not much for measurements in the kitchen, this broth recipe is perfect because you can’t really go wrong as long as you have the basics.

I brew mine up in a slow cooker because you can just throw everything in, set the temp then walk away until it’s done, but you can do it on the stovetop in a large saucepan if you’d like. Though I can say without a smidgeon of doubt that my slow cooker is the most used and most useful appliance in my kitchen. Plus you can get them for like twenty bucks, so there’s really no excuse not to add it to your culinary arsenal. Now, without further ado, my-oh-so-simple broth recipe.

Bones: You can use chicken, beef, lamb, pig, or elephant for all I care. Only don’t use elephants because I’m pretty sure that’s illegal and have you seen their eyes? Soulful. You can either use your leftover bones from roasts or chops and store them in the freezer until you have about two chickens worth of bones, or you can go to your butcher and ask for a pound of beef joints. These guys make a delicious, gelatinously broth and they’re super cheap.

Onions: I just use the skins and scraps from the ones I use during the week. Store them in the fridge in a glass jar until you’re ready to use them. You can add an extra full onion for flavour if you want.

Garlic: Again I just use the skins and scraps from whatever I’ve used that week. Store with the onions. Add a couple of cloves to the broth for a more potent kick.

Carrots: Same goes for these guys. If you find you don’t use that many carrots just chop up 1 or 2 and throw them in, ends and all.

Water: Enough to fill your pot.

Apple Cider Vinegar: ¼ cup should be enough. Vinegar helps leech all the minerals from the bones and puts them into your broth.

Sidenote: I have also been known to throw various other kitchen scraps into my broth. You know the saying: waste not, want not. So you can throw parsley scraps, the stalks from your kale, potato scraps, and so on. Don’t be afraid. Veggies will only add more minerals and perhaps some interesting new flavours.

Mine generally lasts about 5 days in the fridge so if you’ve made more than 5 days worth, play it safe and stick it in the freezer. I like to put them in the 250 or 500ml mason jars so I don’t have to thaw the whole batch at once.

Well that’s all for today friends! Enjoy the rest of your weekend. Crock on!

PS: Here’s a pic of me being served soup by Susur Lee… Swoon!!