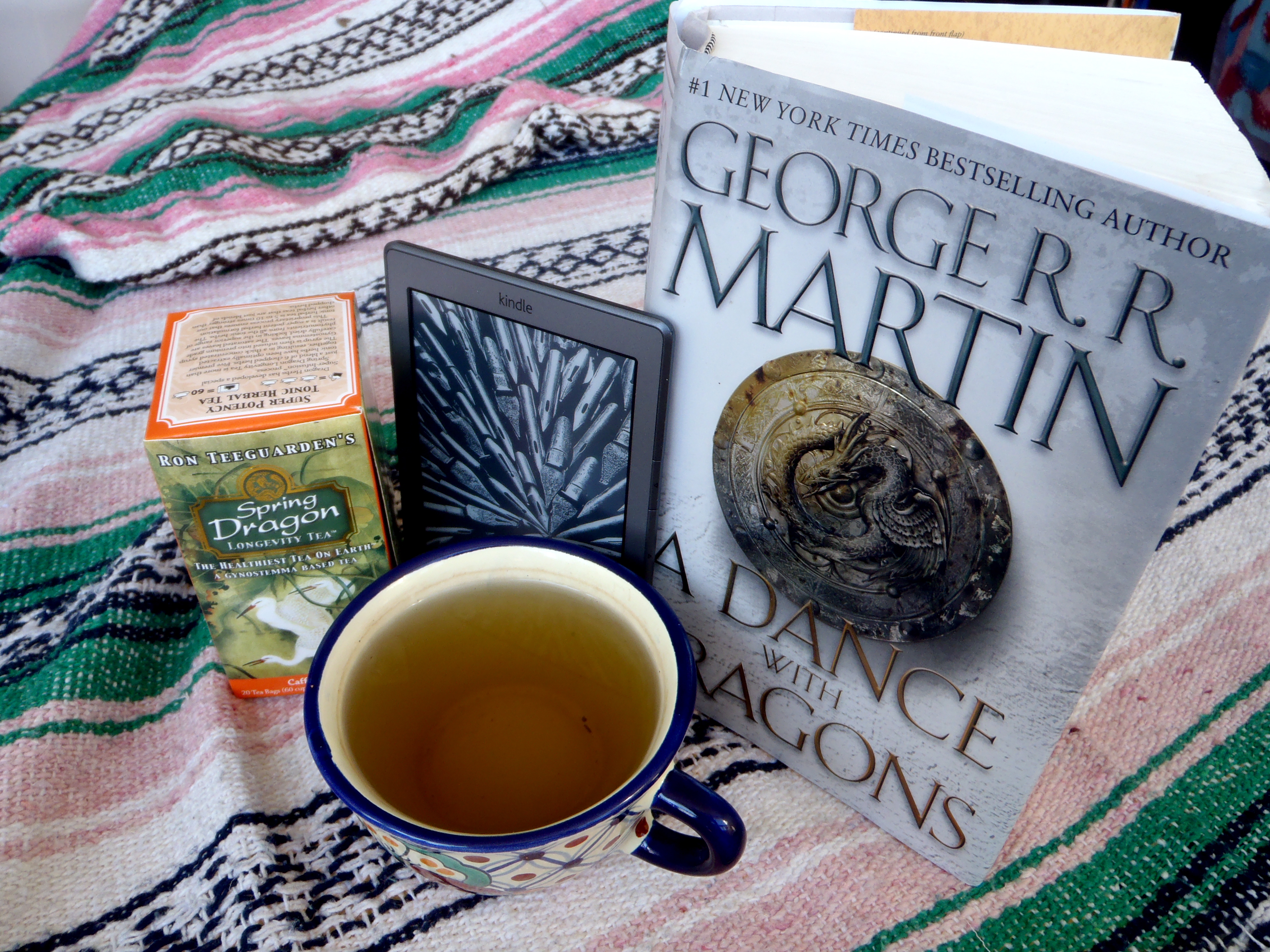 These are my blustery day companions. Don’t worry I’ll tell you all about them.

Editor’s Note: When I wrote this post yesterday it was indeed overcast and icky and the forecast said it would remain so all weekend. However, we all know you can’t trust the weatherman so for the sake of today’s post let’s all put on our imagination caps (they look remarkably like a wizard’s cap) and pretend it’s still rainy and cold. Ready? And go!

So here in Toronto we’ve been hit with some blustery weather that is likely going to stick around all weekend. These types of grey days make me want to stay inside with a warm cup of tea and a good book wrapped in the blanket I bought during a slightly inebriated shopping spree at the Cancun airport. Sidebar: I will also be drinking tea out of a mug bought during said excursion. Could this be the first time tequila has improved one’s life decisions? I also bought… whatever this is. Crazy pot face with legs? So maybe not.

So that’s what I’m going to do today. I’ve got some of Ron Teeguarden’s Spring Dragon Longevity Tea and A Dance with Dragons all loaded up on my kindle. Now before you attack me as a blaspheming English major, I can assure you I have a hardcover copy of ADWD signed by the author no less. But have you seen that thing? It weighs like 10 pounds, so for the sake of my posture, I am rereading it on my kindle.

As you can see I’m drinking my dragon tea in honour of Daenerys’s dragons and also because I’m a sucker for a teas that make wild health claims. This one says it will bestow upon me long and vibrant life. I guess I won’t know whether its claims are valid for another 80 years or so, but I promise to keep you posted! The box states that: “this tonic is carefully crafted to enhance your longevity, adaptability, and thriveability [hey they like to make up words like me!].” It also tells me that it is a Gynostemma* based tea, which is “consumed as a daily tea by health conscious folks” in China and that it is also called “Magical Grass.” Well I like the sounds of it so far! It’s also used as an “adaptability-enhancing, anti-aging herb.” So there ya go. This stuff makes some pretty wicked claims, plus it just tastes delicious. And it’s called Spring Dragon. Win-win-win.

* Wikipedia tells me that this is a “is an herbaceous vine of the family Cucurbitaceae (cucumber or gourd family) indigenous to the southern reaches of China, northern Vietnam, southern Korea, and Japan. Jiaogulan is best known as an herbal medicine reputed to have powerful antioxidant and adaptogenic effects purported to increase longevity. Clinical research has indicated a number of therapeutic qualities of Jiaogulan, such as lowering cholesterol and high blood pressure, strengthening immunity, and inhibiting cancer growth.” Bam! Wikipediaed.

Now, back to the book. Has anyone out there read the A Song of Ice and Fire series? If you haven’t get off you’re computer right now and go do it. I’ll wait. Actually I probably won’t since each book is close to 1000 pages of pure, unadulterated, epic awesomeness! It’s kind of like Lord of the Rings meets HBO’s series Rome in that it combines awesome fantasy, though there are no elves or hobbits, only dragons and direwolves (pfft, only. Come on Cait, we both know they could both rock the socks off of a hobbit or elf) plus super exciting political intrigue, which is not an oxymoron, I assure you. As a bonus, in the TV series based on the books, Game of Thrones (taken from the title of the first book in the series), you get to see Sean Bean (aka Boromir) being all noble and serious and a bunch of totally sexy, scruffy men running around in fur cloaks, riding horses, and kicking major ass. And for all you men out there, there’s usually at least 3 boobs an episode, so there’s something for everyone! Plus Peter Dinklage, who plays Tyrion Lannister, may be the best thing to happen to television since, well ever.

This is an example of some of the eye candy. Interested yet, ladies?

Anyhoo, being the noob that I am, I only got into the books after watching the first season and I must say, it’s been an unbelievable journey. I don’t want to give away any spoilers, but considering I’ve read all five books twice in a year (that’s 10 000 pages on top of school books and other pleasurable reads), and that they were even better the second time around, I am confident enough to suggest that there will be a little something for everyone.

Each chapter is told from the perspective of a specific character, so you really get a lot of different views on similar events and because there are so many characters, despite their length, the novels never drag on. Some of my favourite characters in no particular order because it changes depending on which book I’m reading are: Tyrion, Daenerys, Arya, Jon Snow, Jamie Lannister, Ned Stark, and Cersei (hate the character, LOVE her storyline in books 4 and 5. You’ll see why). I feel like there is someone I’m forgetting, who I’m sure I will think of eventually. This my cousin Jo (HI!), my darling friend Chewbecca (HI to you too!), and I just owning that throne. We played, and we won. Admit it. You’re jealous.

The novels are mainly set in the world of Westeros, which is made up of seven kingdoms ruled by one king who sits that mighty iron throne (you’ll see my cousin, chewy, and I rocking the snot out of that throne over to the side). They also migrate across the Narrow Sea to follow Daenerys and her brother Viserys Targaryen. Their family is said to have descended from dragons and they ruled the Seven Kingdoms for 300 years before being smote down by Robert Baratheon because their brother stole his special lady. In this world magic is just starting to be reawakened and we are plunged into a highly volatile and super exciting time where everyone is playing the game of thrones… bum bum bum! But I’m getting a little carried away and I don’t want to go all plot summary on you, so I’ll stop myself here. Though, listen to the intro music to the TV series and tell me you don’t want to go take over the world, I dare you. This is the best version I’ve found and I listen to it pretty much every day when I need to take things (like blog writing!) to an epic level. I even threw out my neck one weekend head banging to it while I cooked. Listen here!

Alright, all this chatter is getting me too excited. Time to snuggle in with my book, blanket, and tea and take off for the world of Westeros. What is everyone else doing with their blustery weekend? Any of you read any good books lately? Or do some inebriated shopping? Let me know in the comments! Cheers!