Why We Want to Avoid Wheat and Other Gluten-Containing Grains 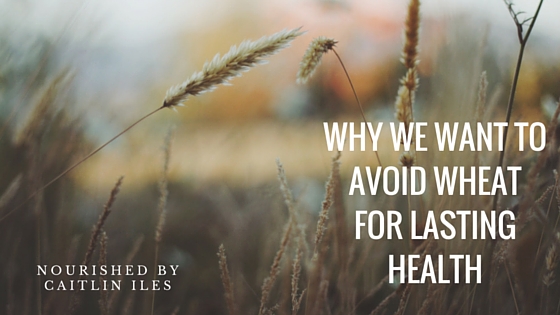 Hi friends! I hope you’ve all been having a fantastic long weekend. I’m visiting friends of mine up in northern Alberta, so today’s post is just going to be a a quick and dirty outline of why I recommend that all my clients avoid wheat and other gluten-containing grains for at least 4 weeks upon coming to see me. There are very few compelling arguments (really none that I’ve ever seen) for eating wheat, but in my experience personally and professionally, I’ve found that a large amount of niggling little health issues can easily be managed by making simple dietary switches, such as removing gluten and all products containing it, from the diet. Little things such as joint aches and pains, eczema, acne, water retention, and the dreaded spare tire around the midsection can all be associated with a wheat allergy or intolerance.

Watch for wheat and other grains in processed foods. In Canada most products containing gluten must clearly specify so on the label, but if you’re especially sensitive watch for cross contamination and cross reactivity.

Check out these articles by Mark Hyman, MD and William Davis, MD  (and this one by Dr. Davis) for more information on some of the effects of gluten consumption on the body. Basically, I recommend strictly eliminating it from the diet for at least 4 weeks, then reintroducing it and seeing how you feel. You never know what benefits you might gain from this little experiment and in the grand scheme of things, 4 weeks is nothing.

These books can be found at my affiliate Amazon Store by clicking here.
Thanks for stopping by friends! Have a wonderfully whimsical week 🙂
Cheers,
Cait xo