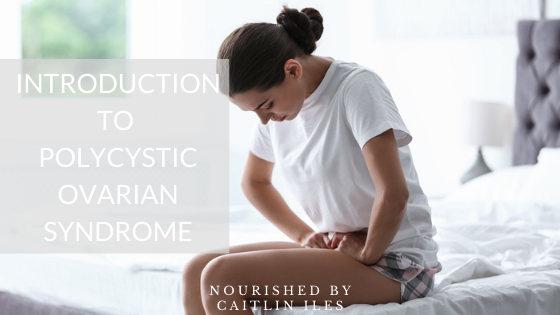 Hello friend! I hope you’re having a beautiful week! I’ve been working with a lot of incredible folks one-on-one lately to help them balance their hormones and boost their energy (which often goes hand-in-hand!) and I thought there was a lot of really valuable information that I could share with you.

In my work I specialize on hormonal imbalances and digestive issues, which again are usually inextricably linked. One of the most common imbalances I see in my practice is Polycystic Ovarian Syndrome, or PCOS. It’s also a condition I was diagnosed with back in 2012, so I have a lot of first-hand experience with symptom management and hormonal rebalancing.

Something that really shocked me whenever I have a client come to me with a PCOS diagnosis is that they have never actually been told what the heck it means! With that in mind, I’ve decided to bust out some of my research to share in a multi-part series on PCOS.

In Part 1 I’ll be outlining exactly what PCOS is, the major symptoms, and risk factors that come along with an unmanaged diagnosis. Bear with me as it may get a little technical at times! However, I firmly believe that knowledge is power so if you can name the hormones that may be impacted you can have a more fruitful discussion with your doctor if this is a diagnosis you’ve received!

What the Heck is PCOS?

Polycystic Ovarian Syndrome (PCOS) is a condition affecting the ovaries (shocker, I know) and uterus that is characterized by multiple cysts covering the ovaries. In a normal menstrual cycle several follicles, which each contain an egg, develop on the ovaries every month. When luteinizing hormone (LH) and follicle-stimulating hormone (FSH) are produced by the pituitary gland these hormones help to mature and release the egg.

How Do I Get a Diagnosis?

In order for an accurate diagnosis of PCOS to be made three symptoms should be present:

Excess release of luteinizing hormone by the pituitary leads to the high levels of testosterone and can cause:

The adult acne associated with PCOS is primarily of the cystic variety and is often located around the mouth and jawline, though it can spread to the cheeks, forehead, and in severe cases it may cover the entire body (Ruper 12).

Sometimes the levels of androgen hormones may not be outside of what is considered a “healthy” range, but when looked at in relation to the levels of estrogen and progesterone, they may be high due to a deficiency in these hormones (Ruper 9).

At its core PCOS is caused by hormonal imbalance in bodies with ovaries and so any treatment plan would have to first address the cause of the imbalance.

How Common is PCOS?

This condition affects approximately 10% of North American people with ovaries and as such is the most common hormone dysfunction amidst those folks of reproductive age and seems to run in families with “20% of mothers and 40% of sisters of those with PCOS also show varying degrees of the syndrome” (Vanderhaeghe 104).

However, the genetic component to PCOS does not mean that those who are genetically predisposed will develop the condition, especially if they take specific lifestyle steps to prevent the condition (Ruper 10).

The imbalance between androgens and estrogen/progesterone hormones is ultimately what causes the menstrual cycle to become irregular, regardless of how the imbalance originally occurred, and due to the reliance on the pituitary gland to regulate the cycle, any issue affecting the pituitary gland can cause a cascade of negative effects in the body and reproductive system (Ruper 9).

***The pituitary gland is a tiny organ, the size of a pea, found at the base of the brain. As the “master gland” of the body, it produces many hormones that travel throughout the body, directing certain processes or stimulating other glands to produce other hormones (Hormones.Org).

What Are Some Early Signs & Causes?

Typically the first signs of PCOS occur in adolescence and are characterized by irregular menses often coupled with heavy bleeding or a lack of menstruation altogether (Vanderhaeghe 104).

The development of PCOS is associated with early pubarche/precocious puberty (breast budding and pubic hair growth) in folks with ovaries between the ages of 7 to 11 years old (Vanderhaeghe 105).

The early onset of puberty is linked with hyper-androgenism and insulin resistance, which suggests alternate hormonal triggers.

Stefani Ruper indicates that there are three types of PCOS, which will be described in further detail in future posts, but in the majority of cases the primary contributing factor in the development of PCOS is hyperinsulinemia or insulin resistance (Vanderhaeghe 105).

I’ve discussed blood sugar balance in other posts such as this one and this one, but I’ll go into more detail in the next post where I dig into some of the causative factors.

Whew! You made it! Stay tuned for Part 2 next week. 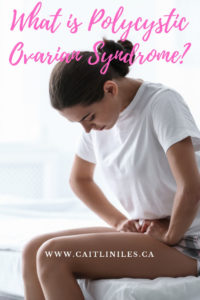